Facebook always makes it a priority to get the best possible content readily available for their users; this not only includes business pages and article sharing, but also the ads you see throughout Facebook. When you exit or try to hide a specific ad, Facebook will ask you why you’re hiding it so that they can use better, less offensive ads.

They are asking people why they are blocking ads so they know not to use the same ad that might have been offensive or useless, for other Facebook users. Also, more importantly, they want to find ads that are more appealing and more interesting to each individual user.

In the past, when someone hid an ad, Facebook took it as a whole group decision, and decided to block it from all users; now, instead, they are taking the reasoning people give for blocking an ad to determine whether or not they should block it for everyone or just that one specific person.

Facebook rep, Max Eulenstein, said that if a user is hiding an ad because it is irrelevant, it means Facebook has to improve its targeting. However, if a user said that an ad was offensive or inappropriate, other people will most likely feel the same way, deeming this ad banned from uses’ newsfeeds. This will help redefine and improve the News Feed.

This is what you will see when trying to hide an ad: 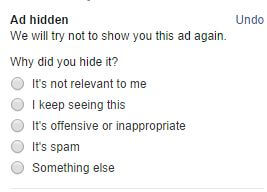 As a result, Facebook has seen a huge decrease in the number of ads people deemed as inappropriate. Facebook gathered feedback and signals from a small group of people to improve the ads everyone sees on their News Feeds.

If you’re already using Facebook ads, this update really won’t affect you, unless you’re sharing inappropriate content, which you’re probably not! Or if you are, stop, it won’t be displayed! Facebook is really just trying to get the best possible ads out there, to improve the experience each of its users have.

Over 25 years ago, the co-founder of Microsoft Bill Gates

In a nutshell, Chat GPT and similar technologies index terms,

If you have low organic traffic despite having great content,